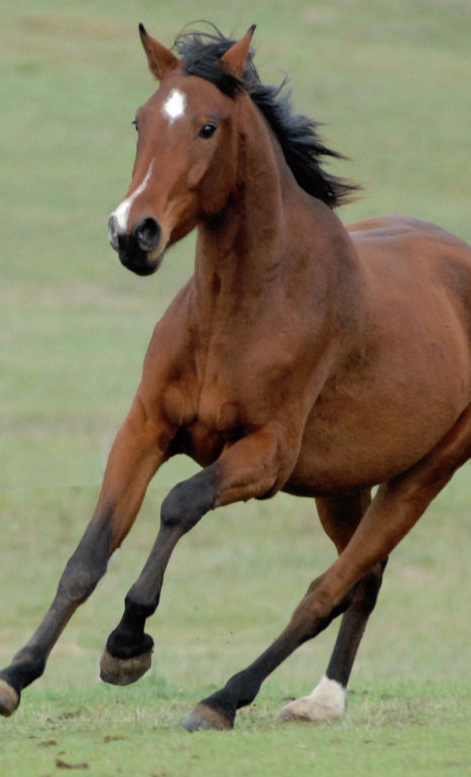 Wild Horses of the Namib

Wild Horses of the Namib roam the sparsely vegetated plains of the Namib Desert in small groups. Over the decades they have conquered the desert as their habitat. They come to drink from the trough at Garub, some 20 km west of Aus. From a hide you can watch the horses and take pictures.


The Namib Desert Horse is a rare feral horse found in the Namib Desert of Namibia, Africa. It is probably the only feral herd of horses residing in Africa, with a population ranging between 90 and 150. The Namib Desert Horse is athletic in appearance, resembling the European light riding horses from which it probably descends, and usually dark in color. Despite the harsh environment in which they live, the horses are generally in good condition, except during times of extreme drought. The horses have been the subject of several population studies, which have given significant insight into their population dynamics and ability to survive in desert conditions.


The origin of the Namib Desert Horse is unclear, though several theories have been put forward. Genetic tests have been performed, although none to date have completely verified their origin. The most likely ancestors of the horses are a mix of riding horses and cavalry horses, many from German breeding programs, released from various farms and camps in the early 20th century, especially during World War I. Whatever their origin, the horses eventually congregated in the Garub Plains, nearAus, Namibia, the location of a man-made water source. 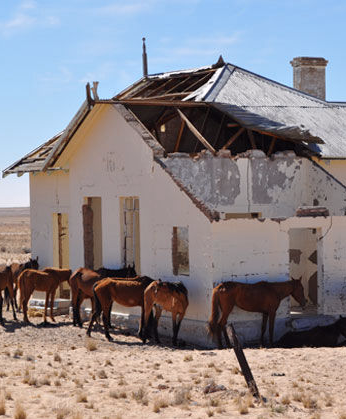 This tranquil little desert town is situated 125km east of Luderitz and the name means 'out' in German, but may be derived from a Khoi-Khoi word which means the 'place of the snakes'. Aus is tucked between the folds of several hills, and if you've ventured this far, then the chances are you're on the way to the coast.
After the German surrender to South African troops in World War I, Aus became an internment camp for German military officers. As many as 1,550 prisoners were held at Aus, and the towns population was further boosted by around 600 South African guards.
The railway to Luderitz stops here, as some years ago the continual struggle to keep the line clear of the Namib Desert sand was abandoned, and in places the line is now covered by massive dunes. One of the major attractions of the area around Aus is the Namib Feral Horses. They are the world's only wild desert-dwelling horses and theories as to their origin are many.

A logical favourite is that they were descended from German Schutztruppe cavalry horses abandoned during the South African invasion of 1915. Another is that they were brought by Nama raiders moving north from beyond the Orange River, whilst a third claims they're descended from a load of ship-wrecked horses en-route from Europe to Australia. More local (and believable), is the story they've been bred from the stud stock of Baron Captain Hans-Heinrich von Wolf, the owner of Duwisib Castle. Wolfy famously set off for Germany in search of more horses, but came to a sticky end in battle in France.
These bony and scruffy looking beasts, can be seen on most Namibian safaris which visit the area. Whatever story you choose to believe, (if any) then look out for them grazing on the either side of the road on the way to Luderitz. Alternatively, stop at the hide and waterhole, 100km east of Luderitz, at Garup Pan, fed by an artificial bore hole.

Web page was designed with Mobirise